There is good news and bad news ... The good news first - the bird brains have a £103 worth of treats, toys and food! The bad news? My credit card hates loves me.

It is a big haul and of course I want to cover it in detail - well, as much as possible, so it's probably going to take me some time - so please hang in there Reader.

I bought it from Scarletts Parrot Essentials for £1.00 for a 45g bar that according to the picture contains wheat, millet, some kind of red flower, a grass of some kind, coconut, apple, nectarine, strawberry, orange, cranberry and more. The ingredients list isn't all that great, it just gives you a percentage (grains 32%, bakery products 23%, etc) which I hate as you can't tell whether there is peanut in it without opening it up but there doesn't seem to be any there. 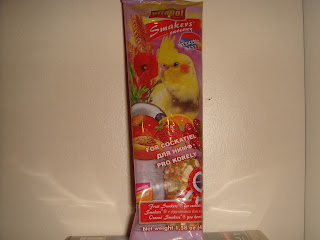 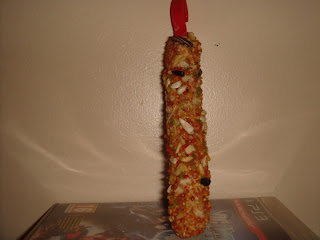 As usual I was skeptical, especially when I saw how colourful it was and no info on how such fantastic colours were achieved - but ... 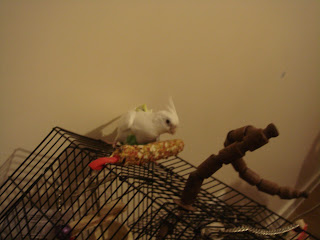 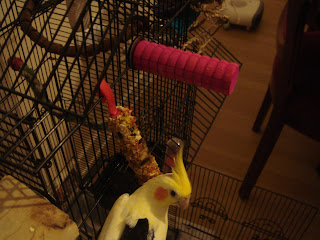 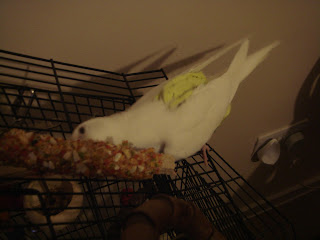 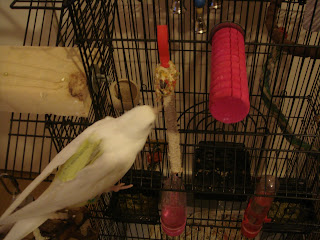 They loved it ... It was all gone in less than 2 hours and then they flew down to the floor to eat the ones that had fallen. I guess the proof really is in the pudding!

So I will have to give in every now and then and buy them some of these.
Posted by Sunny at 10:17 No comments:

Health. I wish I had it. Since a little after Christmas everybody in my immediate family have been ill - one after another. A week or so ago it was my turn and today and two in the morning my sister had to be driven home from Uni as she has come down with something. Now what I had seemed fairly human - what she has most definitely isn't. She's making the same whimpering noises that people on telly do - you know, the slimy people that get beat up for information.

Whatever it is I want none of it.

The bird brains have been doing well though, although we probably haven't cleaned their cages as much as we should have and Japh has been giving me these put upon sidelong glances that tell me that he is not too happy with how much time I've spent with him - but he forgives easily. Thank god.

Another incident ... Japh has a tendency to land in my hair, his flying skills aren't too hot, and I swear to god sometimes he forgets he can fly, and about two days ago he landed in it and his feet got tangled big time. I'm talking wound up in there and not going anywhere. And despite being Asian my hair is almost afro curly - as in it carries on tangling AS I brush it.

So now I've lost a hank of hair - I don't think it's too noticeable and he still hasn't learned his lesson so I've taken to carrying a hair-tie around with me.

Christmas went well, it started snowing again here in London, so we've all still got the January blues, and since money was tight the bird brains only got a couple of things to tide them over.

The Christmas Willow Decoration I bought them from PetsAtHome was a big bust. 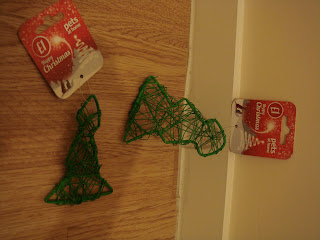 Every now and then they nibble at it but the fact that it is still in one piece tells me that it wasn't such a big hit. I've even strung up beads all over it to entice them but no ...

Another thing I bought them was a Woodlands Willow Tipi, also from PetsAtHome:

Which I still haven't used yet but I'm hoping to hang it upside down from the roof of their cage with treats stuffed inside. Fingers crossed.

And I also bought them a pack of the Woodlands Wood Nibble Sticks:

Email ThisBlogThis!Share to TwitterShare to FacebookShare to Pinterest
Labels: About Me, Haul, Reviews, Shops

So a little while ago I bought a Sun Fun Chips Granola Bar from Pets at Home for £1.99 and although I did say I was going to break it up and give it to them in bite size pieces I decided that the best way to see how good it is would be to give it to them whole. This way I would be able to see if they were scared of it (because as we all know, most parrots are drama queens), if they could actually bite of pieces of it when it is whole and whether the treat stayed on the attachment and didn't just fall to the floor.

Japh went for it within minutes, I lead him to it twice only to have him fly back to play with me but on the third go he was nibbling away at it. Alex though was not interested for the first two days - but then again she's not really treat orientated - it was only when she saw Japh mauling it that she decided to join in.

This treat stick is really soft! Not a challenge at all. Although the outside is a little tough, the inside is so soft it's almost spongy ... and personally I like to give them something that they have to work at, something that will keep them busy when there is nobody there to play with them. A definite minus, for me at least, on the other hand ... this soft, easy treat bar could be a great way to introduce treat sticks to new birds who haven't had one before or for those with tiny, weak beaks like finches.

Now my birds are anuses sometimes, I've bought them treat bells where they've only nibbled near the hook until it goes crashing to the ground into a bazillion tiny pieces and some treat bars are the same, you'll find large clumps of whole seed on the floor of your cage that you have to throw away or dump in their food bowl. This though stayed pretty solid - of course there was a pile of seeds on the floor but when I rifled through them I was happy to see no chunks - only single seeds for the most parts.

Some pictures for your amusement.

Although the Sun Fun Chips Granola bar has a lot of pluses, mainly being that it stays whole, they weren't terrified of it and there is only a tiny little bit left of it - I don't think it's for me. It is way too easy and for the price I'm paying I'm really only getting the kind of seeds you would find included in a cheap canary feed and as for the "colored whole wheat cookie chips that entice the pickiest pets," I took all that off as I don't like to give my pets any artificially colored food of any kind.

Would I buy this again ... maybe, if it was on offer but this would be a treat only once a month or so.

Just a quick photo shoot I forced them through this morning - unfortunately Alex wasn't having any of it so there is none of her but my little diva was more then happy to ham it up for the camera. 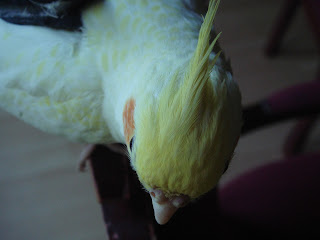 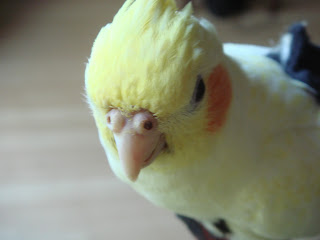 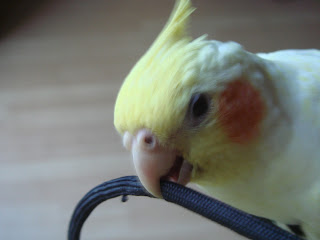 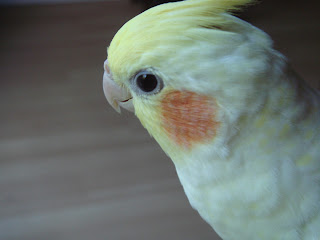 Pets At Home Haul and Reviews

Unfortunately I had to run down to Pets At Home in ghastly British weather because one of their water bottles broke - and since I lack discipline I ended up coming home with more then what I had set out for.

This is the Pets At Home brand one, suitable for rabbits, guinea pigs, rats, chinchillas and ferrets and made out of 100% natural wood and pet safe vegetable dye. Although it's not marketed for birds I don't see why it isn't suitable for them, and at 99p I just couldn't help myself. They come in two gorgeous colours, hot pink and a deep shiny blue. 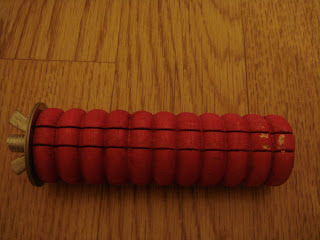 I already have two but I wanted another two for their travel cage so I can recommend this, it's good value and my birds have found the grooves on it quite interesting. BUT it only comes in one size, so it wouldn't be suitable for anything bigger then a cockatiel and beware of voracious wood chewers - the wood is quite soft. Then again half the joy is seeing them destroy their toys.

This too is a Pets At Home brand and retailed at £1 and this too was a small animal toy rather then a bird toy - these will be given to them at Christmas so I'll do a review of how it goes.

This is by Quiko and was £1.99. It's really quite BIG, 71g, which doesn't sound like a lot but it's several meals to a tiny tiel, so I will be busting it up and giving it to them. It does come with a fastener though, so those of you with loads of birds can just hang it up directly.


This is by Happy Pet ... I bought one of these before, except in yellow and I would not have bought them again if they had had something else. These are awful, they leak everywhere, crack easily and run out of water so quickly that I have to put in a food bowl full of water to make sure the birds don't dehydrate while I'm out. And for £2.79 I could have found much better on the internet. Oh well, they just got to last me until I can go shopping online.

Just a couple more pictures, this post is for all you people who think birds are boring - or wise.

About the Crazy Bird Lady

Sunny
London, United Kingdom
Life and times of the Crazy Bird Lady and the two cockatiels that put up with her.